We have all heard the stories of women carrying their baby’s for months without knowing they do. I always thought “how is that even possible”!? Well it happened to me.

My partner and I found out at 17 weeks that I was pregnant. You are now probably thinking how could she not have known. Well I was living a very healthy and active lifestyle so I didn’t gain a lot of weight, I never felt sick or ill and I had no other symptoms of being pregnant.

Now looking back I see where the 2kg weight gain came from. But I assumed this was caused by lack of exercise during our summer holidays. I did feel bloated but this could have been easily caused by my Crohn disease. I would always hold in my stomach automatically and even wore spanx and waiststrainer at times.

During our weekend in Paris where we were very busy sightseeing I suddenly felt my stomach becoming really hard. We stopped walking and I told my partner to feel how abnormally hard my stomach felt. And he jokingly said these are either gasses or we’re pregnant. I was kind of thrown off by what he said, I was thinking to myself how could I be pregnant while on birth control?!  Because I couldn’t shake of what he had said we decided to buy a pregnancy test just to be sure I wasn’t pregnant. After doing the first test we saw two very clear stripes and the word “enceinte”. My French is ok but that word was not in my vocabulary. So after googling it we found out it meant pregnant. We couldn’t believe the outcome and bought two more tests that gave us the exact same results. We immediately called our doctor to run some tests as soon as we got back.

Two days after we had our first appointment in the hospital. We were still kind of in disbelieve, because I still did not feel anything. First we were asked a million questions and after she wanted to do an internal echo (assuming I was very early on). As soon as she slid in the echo she yelled oh god your baby is almost walking and pulled the echo right out!! We were just in major shock and we still hadn’t seen our baby on the screen. Then she used a basic ultrasound and there it was the biggest surprise ever… a full size baby!! Immediately she started to run some tests and do some measurements and shortly after she told us we were expecting a healthy baby GIRL!! I bursted out in tears and my partner started jumping up and down and was screaming “that’s my girl, that’s my girl” over and over again. We were immediately told we needed to schedule our 20 weeks echo to make sure everything was fine. I just remember getting an overload of information, hearing terminology I had never heard before and still was not able to process it all.

Now 13 weeks later (30 weeks pregnant now) our girl is still doing amazing, she is one week ahead in her development. She is healthy, swimming and kicking around. I still feel bad about the spanx but other then that I ate very healthy, did not consume any coffee nor alcohol (since I never drink both) which is a relieve. I’m due early March and we just could not be any happier with our love baby even when we were not planning on having her yet. We feel extremely blessed and thankful for this beautiful little miracle. She is so loved already.

BUMPSHELL OF THE MONTH: YASMEEN LEE 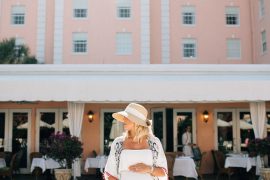 The cutest place for a maternity photoshoot in Palm Beach: The Colony Hotel by Christina Craddock